The first example of the US Navy version of BellBoeing's tiltrotor, the CMV-22B Osprey, achieved its first flight on 21 January 2020, at Bell’s Amarillo Assembly Center, according to the company. 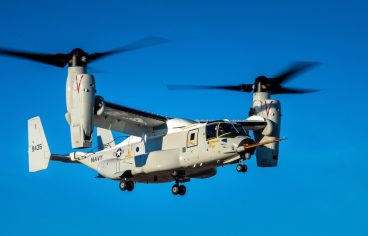 Intended to eventually replace the Navy's fixed-wing C-2A Greyhound in the Carrier On Board Delivery (COD) role, the CMV-22B differs from the US Air Force CV-22 and US Marine Corps MV-22 Osprey tiltrotors in part due to its increased fuel capacity required for the range specified by the US Navy.


Bell says the aircraft will have 1,150 nautical mile range and be capable of carrying major components of the F-35 Lightning II jet engine.