The US General Accounting Office (GAO) has issued a report on the performance of the Bell/Boeing V-22 Osprey in Iraq. The document outlines the successes and unique performance of the MV-22 in what it calls a low threat theater. It also chronicles many issues including aircraft cost, performance, readiness and poor parts availability. Concerns extend to upcoming combat operations in the high altitude conditions expected in the mountains of Afghanistan. 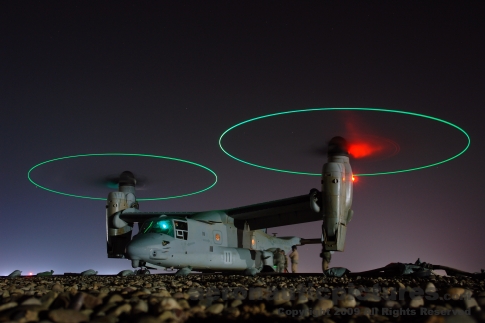 As a service to our readers we are publishing the GAO V-22 report's summary and recommendations as well as a link (below) to the full report. The GAO information is unedited except for formatting to fit our site.

This Stock Photo of a V-22 Osprey tiltrotor was provided by AeronauticPictures.com

Since the 1980s, the V-22, developed to transport combat troops, supplies, and equipment for the U.S. Marine Corps and to support other services' operations, has experienced several fatal crashes, demonstrated various deficiencies, and faced virtual cancellation--much of which it has overcome. Although until recently deployed in Iraq and regarded favorably, it has not performed the full range of missions anticipated, and how well it can do so is in question. In view of concerns about the V-22 program, you asked us to determine if the V-22 will perform as promised, and if it will, at what cost. GAO reviewed (1) current MV-22 operations in Iraq; (2) strengths and deficiencies in terms of the capabilities expected of the V-22; and (3) past, current, and future costs. GAO reviewed a range of program documents and data, interviewed program officials, operators and others; and observed MV-22 operations in Iraq and shipboard.

As of January 2009, the 12 MV-22s (Marine Corps variant of the V-22) in Iraq successfully completed all missions assigned in a low threat theater of operations--using their enhanced speed and range to engage in general support missions and deliver personnel and internal cargo faster and farther than the legacy helicopters being replaced. Noted challenges to operational effectiveness raise questions about whether the MV-22 is best suited to accomplish the full repertoire of missions of the helicopters it is intended to replace. Additionally, suitability challenges, such as unreliable component parts and supply chain weaknesses, led to low aircraft availability rates. MV-22 operational tests and training exercises identified challenges with the system's ability to operate in other environments. Maneuvering limits and challenges in detecting threats may affect air crew ability to execute correct evasive actions. The aircraft's large size and inventory of repair parts created obstacles to shipboard operations. Identified challenges could limit the ability to conduct worldwide operations in some environments and at high altitudes similar to what might be expected in Afghanistan. Efforts are underway to address these deficiencies, but some are inherent in the V-22's design. V-22 costs have risen sharply above initial projections--1986 estimates (stated in fiscal year 2009 dollars) that the program would build nearly 1000 aircraft in 10 years at $37.7 million each have shifted to fewer than 500 aircraft at $93.4 million each--a procurement unit cost increase of 148 percent. Research, development, testing, and evaluation costs increased over 200 percent. To complete the procurement, the program plans to request approximately $25 billion (in then-year dollars) for aircraft procurement. As for operations and support costs (O&S), the Marine Corps' V-22's cost per flight hour today is over $11,000--more than double the targeted estimate.

Our recommendations from this work are listed below with a Contact for more information. Status will change from "In process" to "Implemented" or "Not implemented" based on our follow up work.

Recommendation: Given the difference between the now demonstrated and previously expected operational capabilities and costs of the V-22, the Secretary of Defense should re-examine the V-22 by requiring a new alternatives analysis to redefine and revalidate the proper mix of aircraft to achieve the Marine Corps' current and future medium-lift needs, possibly to include other services' operational uses. Such an analysis should weigh V-22 capabilities and costs against the capabilities and costs of other existing helicopters and aircraft, upgrades to existing helicopters and aircraft, and potential future acquisitions, such as the upgrade to the CH-53 currently under development. This analysis should be conducted within the context of anticipated future budgetary constraints, and the services should then adjust total V-22 procurement and annual production and acquisition plans accordingly.

Comments: When we confirm what actions the agency has taken in response to this recommendation, we will provide updated information.

{mospagebreak}
Recommendation: Given the unresolved operational effectiveness and suitability issues and increasing costs associated with the V-22 system, the Secretary of Defense should require the Marine Corps to develop a prioritized strategy to improve system suitability (including identifying why measures such as component reliability and aircraft availability are low), reduce operational costs, and align future budget requests accordingly.

Comments: When we confirm what actions the agency has taken in response to this recommendation, we will provide updated information.