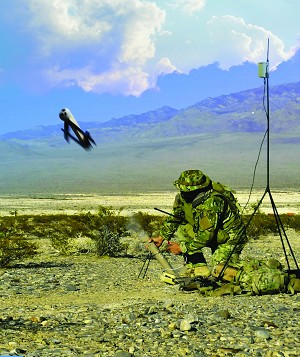 The Block 10C upgrade also enables the concurrent operation of multiple Switchblade systems in the same vicinity without signal conflict, provides the opportunity to extend operational ranges significantly using another DDL arbiter, such as AeroVironment’s Puma AE™ unmanned aircraft system, and facilitates the automatic communication of mission plans from one AeroVironment unmanned aircraft system to a Switchblade, also known as sensor to shooter operations.

“The new Switchblade Block 10C is the result of close collaboration between our U.S. Army customer and the AeroVironment team,” said Kirk Flittie, AeroVironment vice president and general manager of its Unmanned Aircraft Systems business segment. “Working with the Army and other users we continue to evolve and expand the capabilities of the Switchblade tactical missile system to provide troops with the most reliable and effective force protection solution possible. We are already working on future upgrades to this important capability to give our forces an even greater advantage on the battlefield.”

AeroVironment and its strategic teammate for advanced warheads, Orbital ATK, will work together to produce and deliver the systems.

The Switchblade™ tactical missile system, developed and produced by AeroVironment, enables the infantry squad with increased lethality, reach and force protection through its rapid deployment, direct fire and collateral damage avoidance capabilities. Switchblade was first fielded in 2011 under a series of U.S. Army urgent needs requiring a portable weapons system capable of engaging targets beyond line of sight, in defilade, on rooftops, fleeting targets, those in concealed locations and in complex areas of operation requiring minimal collateral damage for the dismounted operator. Switchblade provides day and night operation, loitering capability and wave off to minimize collateral damage. Since the initial 2011 award, AeroVironment has produced more than 1,500 Switchblade missile bodies for various customers in both integrated warhead and training configurations.

RQ-11B Raven®, RQ-12 Wasp®, RQ-20A Puma™ and Shrike VTOL™ comprise AeroVironment’s Family of Small Unmanned Aircraft Systems. Operating with a ® common ground control system (GCS), this Family of Systems provides increased capability to the warfighter that can give ground commanders the option of selecting the appropriate aircraft based on the type of mission to be performed. This increased capability has the potential to provide significant force protection and force multiplication benefits to small tactical units and security personnel. AeroVironment provides logistics services worldwide to ensure a consistently high level of operational readiness and provides mission services for customers requiring only the information its small UAS produce. AeroVironment has delivered thousands of new and replacement small unmanned air vehicles to customers within the United States and to more than 30 international governments.

AeroVironment is a technology solutions provider that designs, develops, produces, supports and operates an advanced portfolio of Unmanned Aircraft Systems (UAS) and electric transportation solutions. The company’s electric-powered, hand-launched unmanned aircraft systems generate and process data to deliver powerful insight, on demand, to people and enterprises engaged in military, public safety and commercial activities around the world. More information about AeroVironment is available at www.avinc.com.

Orbital ATK is a global leader in aerospace and defense technologies. The company designs, builds and delivers space, defense and aviation systems for customers around the world, both as a prime contractor and merchant supplier. Its main products include launch vehicles and related propulsion systems; missile products, subsystems and defense electronics; precision weapons, armament systems and ammunition; satellites and associated space components and services; and advanced aerospace structures. Headquartered in Dulles, Virginia, Orbital ATK employs approximately 12,000 people in 18 states across the U.S. and in several international locations. For more information, visit www.orbitalatk.com.

Certain statements in this press release may constitute "forward-looking statements" as that term is defined in the Private Securities Litigation Reform Act of 1995. These statements are made on the basis of current expectations, forecasts and assumptions that involve risks and uncertainties, including, but not limited to, economic, competitive, governmental and technological factors outside of our control, that may cause our business, strategy or actual results to differ materially from those expressed or implied. Factors that could cause actual results to differ materially from the forward-looking statements include, but are not limited to, our ability to perform under existing contracts and obtain additional contracts; our reliance on sales to the U.S. government; changes in the timing and/or amount of government spending; changes in the supply and/or demand and/or prices for our products and services; changes in the regulatory environment; the activities of competitors; failure of the markets in which we operate to grow; failure to expand into new markets; failure to develop new products or integrate new technology with current products; and general economic and business conditions in the United States and elsewhere in the world. For a further list and description of such risks and uncertainties, see the reports we file with the Securities and Exchange Commission, including our most recent Annual Report on Form 10-K and Quarterly Reports on 10-Q. We do not intend, and undertake no obligation, to update any forward-looking statements, whether as a result of new information, future events or otherwise.