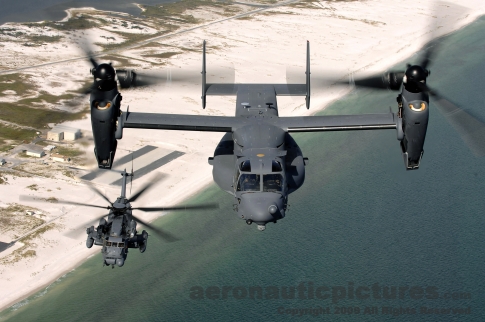 According to a statement issued by the International Security Assistance Force (ISAF), there was a crash of a Special Operations U.S. Air Force CV-22 Osprey in southern Afghanistan late on the evening of 8 April 2010, killing three U.S. service personnel, one civilian contractor, and injuring numerous other military personnel. Though the Taliban has apparently claimed responsibility, the actual cause of the crash is unknown. The V-22 Osprey aircraft are built by Bell Boeing. Variants include the CV-22 and Marine Corps MV-22 Osprey.

The ISAF says the CV-22 was carrying U.S. Forces when it crashed some seven miles west of Qalat City, Zabul Province. The injured were transported to a nearby base for medical treatment.

To learn more about the history of the V-22 Osprey, get the DVD of only independent hour-long V-22 Osprey video which details the development of this interesting yet controversial aircraft. It was produced by us, AeroSpaceNews.com!

A download edition of the V-22 video is also available.

The source for this news item is the ISAF - International Security Assistance Force.