A splashdown in the Atlantic Ocean signaled the end of DM1, the first flight of Crew Dragon, the SpaceX spacecraft intended to carry humans to the ISS as part of NASA's Commercial Crew Program. Boeing is also offering a vehicle that will see the start of testing later in 2019 if all goes to plan.

According to a NASA statement:

The mission began March 2, when the Crew Dragon launched from NASA’s Kennedy Space Center in Florida, and racked up a number of “firsts” in less than a week. 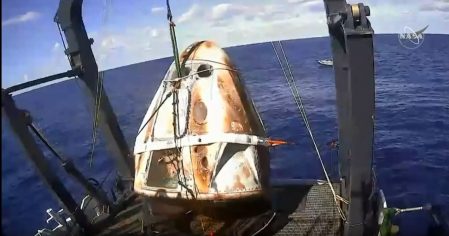 Crew Dragon carried a passenger on this flight test – a lifelike test device named Ripley, which was outfitted with sensors to provide data about potential effects on humans traveling in the spacecraft. After SpaceX processes data from this mission, teams will begin refurbishing Crew Dragon for its next mission, an in-flight abort test targeted to take place this summer. Demo-2, the first crewed test flight, will carry NASA astronauts Bob Behnken and Doug Hurley on the spacecraft’s final flight to certify Crew Dragon for routine operational missions.