The US Air Force announced that Boeing has been awarded $2.6 Billion for a fifth KC-46A Pegasus aerial refueling tanker production "lot" despite reported problems with the 767-derived platform. 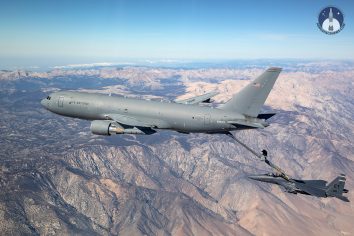 On 11 September 2019, Valerie Insinna of Defense News reported that "the U.S. Air Force has indefinitely barred the KC-46 from carrying cargo and passengers."


Insinna's story described the problem as a Category 1 deficiency along with three others at that level: The aircraft's remote vision system (RVS), boom scraping, and an Air Force-requested change to accommodate A-10 performance.

The fifth lot is a contract for 15 KC-46A aircraft, spares, support equipment, spare engines and wing air refueling pod kits, according to an announcement by Boeing.

The company says, "Boeing received its first two production lots, for 7 and 12 aircraft, in August 2016. The third lot, for 15 aircraft, was awarded in January 2017; the fourth lot for 18 aircraft in September 2018. With this fifth production lot, Boeing now is on contract for 67 KC-46 tankers."