The name, Red Hawk, honors the legacy of Tuskegee Airmen, and pays homage to their signature red-tailed aircraft from World War II. The name is also a tribute to the Curtiss P-40 Warhawk, an American fighter aircraft that first flew in 1938 and was flown by the 99th Fighter Squadron, the U.S. Army Air Forces’ first African American fighter squadron.

The P-51 and P-40 are some of the most iconic fighters of their time. Likewise, the T-7A will be the staple of a new generation of aircraft. The Red Hawk offers advanced capabilities for training tomorrow’s pilots on data links, simulated radar, smart weapons, defensive management systems, as well as synthetic training capabilities.

The first T-7A aircraft and simulators are scheduled to arrive at Joint Randolph AFB, Texas, in 2023 as a replacement for the venerable T- 38C. And, the moniker “Red Hawk” is certainly fitting, as that species of raptor is often seen soaring over our pilot training bases. 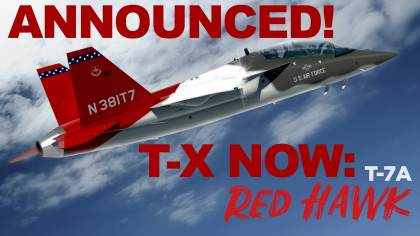