The motivation for the action, according to the FAA, was due to "recent incidents involving the reckless use of unmanned model aircraft near airports and involving large crowds of people."

That grammar is wrong. It should say, "most recent incidents." That's because anybody paying attention knows that reckless use of unmanned model aircraft has been going on quite a lot and the FAA only now, liking a sleeping giant, is waking up to the fact.

Friends, do not misunderstand what I just wrote. I fly RC and it was my start in aviation at 14 years old. But any rational person could not help but conclude, from the evidence easily available on YouTube alone, that there are some in the USA who fly RC airplanes, helicopters and multicopters in a reckless manner, endangering themselves, others, and the hobby.

The vast majority of RC hobbyists are fun loving, responsible, community oriented and very generous with their time and knowledge (I can think of Flite Test as a quick and excellent example). It is a small percentage that are bad actors, but the size of that group is, unfortunately, growing.

Back to the FAA. Sadly, they are continuing what seems to me to be a little communication bipolar disorder. On the one hand, they re-assert the agency's authority over hobby use of RC with statements like "Compliance with these rules for model aircraft operators has been required since the Act was signed on February 14, 2012, and the explanation provided today does not change that fact."

On the other hand, the published guidance says "Hobby or recreational flying doesn't require FAA approval but you must follow safety guidelines."

Perhaps the most important take away from today's FAA announcement is the re-statement of the banned activities when using RC aircraft. 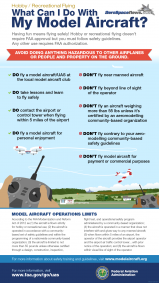 
By the way, did you know the FAA wants you to contact any airport or control tower within 5 miles of wherever you plan to fly any RC aircraft? They don't say if those are statute or nautical miles, just that you are supposed to get in touch and let them know before you fly.

What do you think?