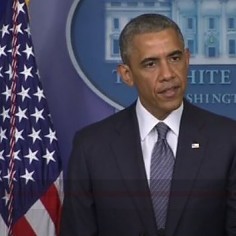 US President Obama says that Malaysia Airlines flight MH17 was shot down. There were 298 passengers and crew on board, none survived. President Obama also said the aircraft was brought down by a missile, and that the weapon was seemingly fired from a region of the Ukraine controlled by pro-Russian separatists. "Evidence indicates the plane was shot down by a surface to air missile that was launched from an area that is controlled by Russian-backed separatists," said Obama during a press conference on 18 July 2014.

Published reports citing unnamed US Defense department sources are also claiming the Boeing 777 was shot down by a missile. There are conflicting reports about which missile system was used.

The route flown by MH17 was approved by the ICAO and it appears that the aircraft was 1000' above the boundary to restricted airspace in the region. Some air carriers were flying completely around the disputed region, but reports indicate the majority of air carriers opted to save fuel and other costs by flying through the ICAO approved route.

Since the loss of MH17, the US FAA has issued a full restriction on flights in that region through an expanded Notice to Airman:

On the evening of July 17, the Federal Aviation Administration issued a Notice to Airman (NOTAM) prohibiting U.S. flight operations until further notice, in the airspace over eastern Ukraine, due to recent events and the potential for continued hazardous activities. The restricted area includes the entire Simferopol and Dnepropetrovsk flight information regions (FIRs). This action expands a prohibition of U.S. flight operations issued by the FAA in April, over the Crimean region of Ukraine and adjacent areas of the Black Sea and the Sea of Azov. No scheduled U.S. airlines are currently flying routes through this airspace.

UNTIL FURTHER NOTICE, DUE TO RECENT EVENTS, ALL FLIGHT OPERATIONS BY UNITED STATES (U.S.) OPERATORS WITHIN THE SIMFEROPOL (UKFV) AND DNEPROPETROVSK (UKDV) FIRS ARE PROHIBITED. EVENTS HAVE INDICATED THE POTENTIAL FOR CONTINUED HAZARDOUS ACTIVITIES. THIS ACTION EXPANDS A PROHIBITION OF U.S. FLIGHT OPERATIONS ISSUED BY THE FAA INITIALLY AS A NOTAM ON APRIL 3, 2014, AND LATER AS SFAR NO. 113 OVER THE CRIMEAN REGION OF UKRAINE AND ADJACENT AREAS OF THE BLACK SEA AND THE SEA OF AZOV. THE PROHIBITIONS DESCRIBED IN THE SPECIFIED AIRSPACE CONTAINED IN THIS NOTAM AND THE ASSOCIATED JUSTIFICATION FOR THIS SPECIAL NOTICE WILL BE RE-EVALUATED BY 31 OCT 2014. 18 JUL 00:30 2014 UNTIL 1410312359. CREATED: 18 JUL 00:41 2014

There are unconfirmed reports that at least one of the so-called black boxes has been recovered and taken to Russia, contrary to international protocols. Reports also state that the crash scene is not being kept sanitized and that individuals have been seen going through the wreckage looking for valuables to pilfer.